Telecom experts say that cellular service providers will either have to take a hit on their profits or pass on the added cost to consumers. Whatever the case, it is imperative that they strike a balance between the two. It is thought that in the first phase, 3G and 4G services might only be available in major cities of the country such as Islamabad, Karachi, Lahore, Peshawar and Quetta, and will reach other cities later. In the second phase, prepaid customers will also be able to avail this service and 3G services will be expanded to about 80 more cities.
3G and 4G technologies have been launched in Pakistan Last month, however these are not cheap technologies. Therefore, cellular service providers will probably offer 3G and 4G networks at higher tariffs then for EDGE. However, considering the intense competition between network operators, chances are that the extra burden of the expected cost will not be fully shifted to the mobile phone users (thanks god).

5G: The next phase of mobile telecommunication
Mobile phone users and service providers are always on the lookout for higher data rates in mobile networks. The next generation of technology which is currently in the development phase is the fifth generation of cell phone technology, or simply 5G. It is the next major advancement in mobile telecommunication standards which will supersede 4G standards. Since 5G is still in the development stage, standards have not been laid out for it by any telecommunication standardisation body.

Going forward, the need and desire for faster and higher data rates in cellular communication networks, by not only mobile phone users but also cellular service providers, is one of the biggest motivations behind today’s ongoing 5G research. Most experts predict that the deployment of 5G networks will likely occur around 2020.

4G LTE Long Term Evolution:
This is considered to be the best version of 4G technology as far as standards are concerned. 4G service without LTE is basically High Speed Packet Access (HSPA), which is a faster version of 3G GSM network. The two formats of 4G wireless technology, which are accepted by the International Telecommunications Union as ‘True 4G’, are LTE Advanced and WiMAX Release 2.

WiMAX Worldwide Interoperability for Microwave Access (WiMAX) allows speed of 30 to 40 megabits per second. This is probably one of the closest technologies to meet the standards of being called True 4G technology. 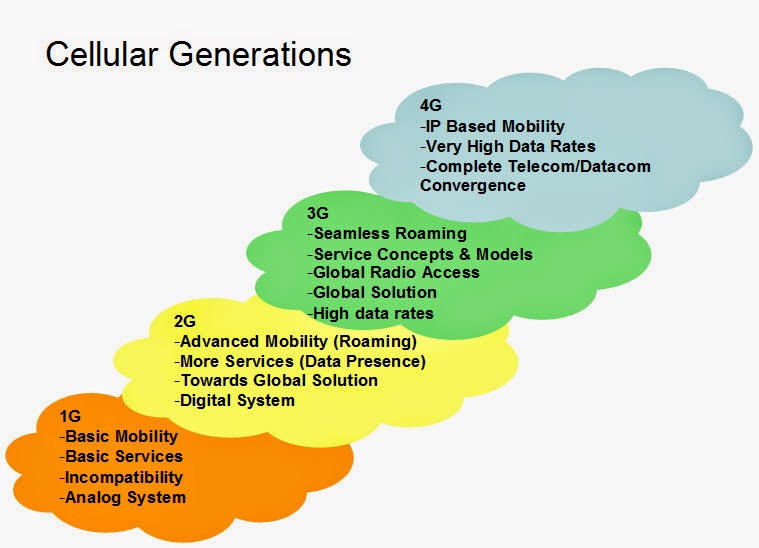 4G:
With this technology, a user can (theoretically) experience speeds from at least 100 megabits per second to up to 1 gigabit per second (peak download rate). The speed depends on various factors such as high mobility communication or low mobility, location etcetera. In addition to faster speeds, another advantage of 4G technology is reduced latency. Latency refers to the time it takes the network to respond to a request. There are two more versions of 4G, LTE and WiMAX.

3G:
The third generation of cell phone technology was first used in Japan in 2001. This technology enabled various networks to provide services such as web browsing, e-mail, video downloading, picture sharing, global positioning service (GPS), mobile television and video conferencing. It also allows simultaneous transfer of voice and data. Better bandwidth and increased speed of around 200 kbps and above are also possible with this technology.

There are three competing 3G technologies currently being used: Universal Mobile Telecommunications System (UMTS), Code Division Multiple Access (CDMA), and Wideband-CDMA. The real difference in 3G and 3.5G technologies is the speed of the network and speed of data transfer. 3G technology can support an average data transfer of about 200 kbit+ and in 3.5G it is around 300 kbit+. 3G devices that support speeds of around 7.2 Mbps are often called 3.5G devices

2G: The second generation of cellular technology was launched in 1991 in Finland. It was based on the technology termed global system for mobile communication (GSM), and text messages or SMS were sent through it. Data speeds were slow and downloading anything meant waiting for a long time.

2.5G: The intermediary technology, also referred to as GPRS, replaced 2G in order to improve communication. This technology allowed transmission of data such as emails and access to the internet, in addition to simple text messages and calls. The standard further evolved to 2.75G, known as EDGE, which allowed slightly faster data rates.

1G: This was the first generation of wireless telephone technology. It was introduced in 1981 with limited capacity. Simple phone calls were pretty much all it was able to do.

Until recently, only 2G and 2.5G/2.75G services were offered in Pakistan, despite their being considered obsolete in many other parts of the world. After the recent acquisition of 3G licenses by Mobilink, Telenor, Zong and Ufone, and an additional 4G licence by Zong, there has been much heated discussion regarding these technologies. So what exactly are these next generation mobile technologies and how will they benefit mobile phone users and Pakistan as a country?