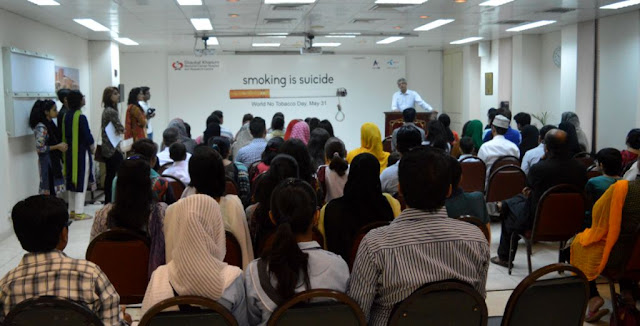 Warid Telecom, a socially conscious organization which has persistently contributed to the welfare of the society, has collaborated with the Shaukat Khanum Memorial Cancer Hospital yet again to commemorate the World No Tobacco Day, 2015.

This joint effort is to raise awareness within the society concerning the adverse effects of smoking and tobacco consumption. The awareness drive was brought forth through social media, trade campaigns as well as awareness sessions in different corporate organizations, schools and universities to highlight the hazards of tobacco use.  Warid Telecom has also raised funds for cancer patients unable to afford the required treatment. In addition to highlighting the importance of charity and education, Warid set forth to instill consciousness amongst its employees about the perilous effects of tobacco on health and life itself.

Major schools from all over Pakistan participated in a contest linked to increasing awareness of the cause in which approximately 6000 entries were received. Dr. Faisal Sultan, CEO SKMT, distributed shields and certificates amongst the winners of the competition. Commenting on this, he said  “Tobacco consumption has become no less than an epidemic in this day and age; it’s also the main cause for mouth, esophagus, throat, stomach, liver, prostate and kidney cancers. Mental illnesses and malaises can also develop as a result of tobacco abuse. It is noteworthy that if thorough examination of the hazards of tobacco and proper education is not provided to the masses it may lead to an inevitable catastrophe. I would specifically like to thank Warid Telecom, for showing immense support for this significant cause. Warid continues to support us in all our campaigns throughout the year”

Shaukat Khanum Memorial Hospital and Warid have collaborated in the past to attain the same goal – informing the masses about the importance of cutting down or abstaining from tobacco usage.  Nearly 40 percent of cancer in males is attributed to tobacco in Pakistan. According to World Health Organization, tobacco use kills nearly six million people every year and this is expected to rise to an estimated eight million by 2030, unless necessary measures are undertaken.

TikTok launches its own smartphone

The future of internet in Pakistan is at risk