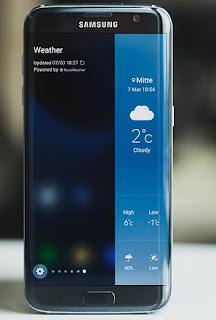 Samsung Galaxy S7 EDGE is an upcoming smartphone from the South Korean multinational company. It is an amazingly awesome smart device  with 5.5 inch HD display. It has a smooth touchscreen and shinier backside.
The smartphone is an upgraded version of Galaxy S7 and offers a vast range of feature. It has 12MP  primary camera with phase detection technology, autofocus, OIS, and a powerful LED flashlight. For selfies, it has 5MP front shooter,
The smartphone will come in 32/64 GB built in memory with 4GB of RAM and MicroSD support for up to 200 GB. It is also offer 115 GB could storage  to satisfy ever growing needs of memory. Memory wise. its a great smartphone, runs on google’s latest Android OS, V6.0 Marshmallow.
The device is powered 3600mAh fast charging battery which gives 3G talk time of upto 81h. This phone will expected in March, this year. It will come in Black, White, Gold, Silver colors.

Chrome extension Give bookmarks to Your right-click Menu