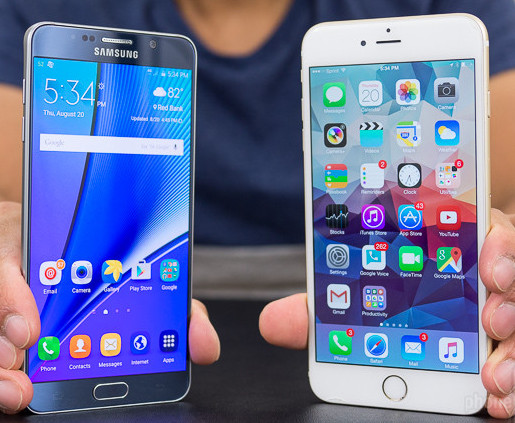 Both Samsung Galaxy Note 5 and iPhone 6s Plus are premium and most recent devices by the respective giants.The display screen of iPhone 6s Plus is 5.5 inches which offer a resolution of 1080 x 1920 pixels. Its display screen recognizes new gestures like harder and lighter taps. Meanwhile, Note 5 is holding a bigger 5.7 inches display with 1440 x 2560 pixels resolution and Coming Gorilla Glass 4to keep the user away from the sick feeling of dropping the device.
The iPhone 6s Plus is a big overhaul in terms of cameras as compared to the previous lineup of iPhone 6s and iPhone 6s Plus. it is possessing a 12-megapixel camera on the rear side while 5-megapixel camera on the front, featuring optical image stabilization, phase detection autofocus and a dual tone LED flash.
However, Galaxy Note 5 is equipped with “pixel shooter on the rear, sporting Dual Shot, Simultaneous HD video and image reco nt facing camera is similarS megapixels.
The lingerprint sensor of iPhone 65 Plus 5 . ‘ay (Visa, MasterCard, AMEX certihed) while the Fingerprint sensor of Note 5 is Pa ‘nd it is most outstanding mobile payment system due to its ability to host both M ard reader technology as well as NFC.Samsung is winning the race in terms of a bit bigger sc n size, double RAM, better resolution, sufficient battery power which is Li-Po 3000 mAh and of course an ample internal storage that comes with two options of 32 GB and 64 GB. Although Apple’s iPhone 65 Plus is attractive in terms of its 30 touch and a new interface through ms 9 but these specihcations are somewhat insufhcient as compared to the ones offered by Note 5.

Easypay & Daraz.pk to bring affordable smartphones for everyone at Mobile Week 2016

Top 5 acts EVER on World’s Got Talent

Waves going strong even after the fire”